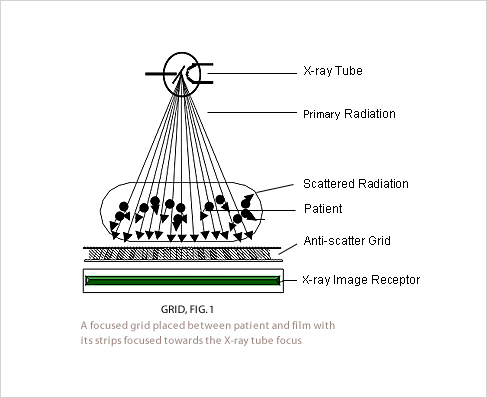 GRID
A device that, when introduced between the patient and the film cassette (or image intensifier), reduces the amount of scattered radiation that can reach the film cassette (Fig. 1). The grid was invented by Gustave Bucky already in 1913 and is still the most effective device for reduction of scattered radiation. It is usually made of a thin plate, in which very thin strips of high-attenuating material, commonly lead, is placed in a linear, parallel pattern. The spaces between the strips are filled with low-attenuating material.

The grid pattern refers to the orientation of the strip pattern. In a linear grid, the strips are placed in a parallel pattern, in a crossed grid two linear grids are placed perpendicular to each other.

The grid can be parallel or focused. In a parallel grid, the strips are mounted parallel to each other which means that the grid is "focused" at infinite distance. Such a grid can only be used together with small fields or at very large focal distances and is therefore rarely used. 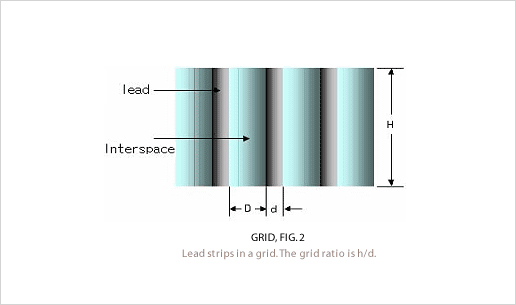 The grid can either be used as a stationary grid or a moving grid. Moving a grid during exposure will blur out the shadows of the lead strips in the image.
The moving grid was invented by Hollis Potter in 1920 and the device has since then been called a Potter-Bucky grid.
FOCUSED GRID
A grid in which the absorbing strips (which are often made of lead) are slightly angled towards the focal spot (Fig.1).
The grid can therefore be used only at a specified focal distance (actually inside a narrow distance interval around this specific distance). Otherwise the grid will absorb the primary radiation and parts of the film are barely exposed. Focused grids may be linear or crossed (see grid).

A grid where the lead strips are parallel to each other in their longitudinal axis. Most linear grids are focused, i.e. their strips are slightly tilted, converging at a line in space (the convergent line. A non-focused linear grid have strips that are parallel also when viewed in cross-section; this is called a parallel grid. Many X-ray tables are equipped with linear, focused grids, and the strips in these grids are parallel with the long axis of the table allowing the X-ray tube to be tilted in this direction.
CROSSED GRID

A grid consisting of two superimposed parallel grids having the same focusing distance. Such grids are very efficient in removing scattered radiation but must, however, be arranged at exactly right angle to the beam. The use of such a device is therefore limited.
APERTURE GRID
A grid which is designed to improve spatial resolution in stationary detector CT scanners (fourth generation CT scanner) by reducing the sensitive area of each detector element. The grid is composed of highly X-ray attenuating (high atomic number) metal which is placed just in front of the X-ray detector array (Fig.1). The acceptance angle is large enough to pass radiation from the full range of X-ray tube positions. Because the grid is designed to reduce the effective size of the X-ray detectors, some of the primary X-ray beam which passed through the patient is discarded. Thus, although the grid improves the spatial resolution, it also reduces the X-ray detection efficiency and the dose efficiency.
MOVING GRID
A grid which is set into motion (one way or oscillating) just before an X-ray exposure starts. The intention is to remove or reduce the shadows produced by the lead strips in the grid. The moving grid was invented by Hollis E. Potter in 1920, see Potter Bucky grid. See also stationary grid.
STATIONARY GRID
A grid used to remove scattered X-rays which is placed between the patient and the X-ray detector. In this grid, the X-ray opaque strips are so thin and so close together that the grid can remain stationary without the shadows of the strips being sufficiently visible to interfere with the image detail of the film (e.g. Lysholm grid).